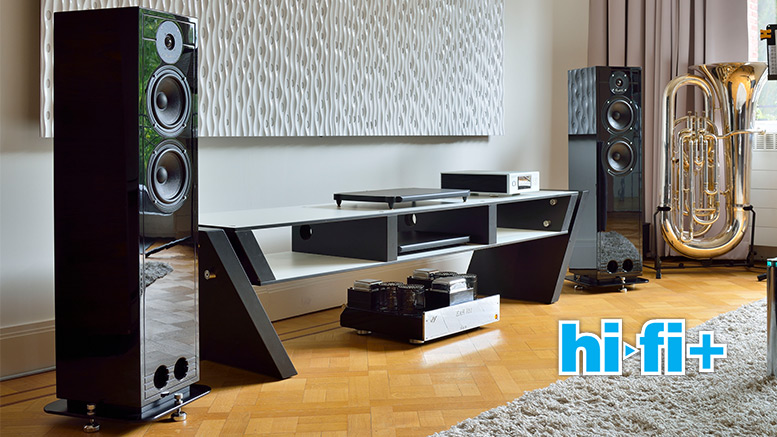 You may be looking at the picture and thinking “Ho hum, just another mid-sized two-and-a-half-way floorstander, with doped paper cones and a soft dome tweeter”. And you’d be wrong.

Yes, it is a mid sized, two-and-a-half-way floorstander and, yes, it has doped paper cones and a soft dome tweeter, but no, the Russell K Red 150 is anything but ‘just another floorstander.’

Like its standmount siblings, the Red 150’s cabinet is undamped. Its designer, Russell Kauffman, argues that damping materials store energy and then release it, out of time from the music, leading to blurring and smearing of the sound. You can’t realistically prevent a cabinet from resonating, so Russell K makes an undamped cabinet to resonate in sympathy with the signal and, crucially, still in time with the signal, and then control that resonance by internal bracing as necessary.

That bracing also serves to divide the cabinet internally into cavities optimised for the output of each driver. The bracing comprises panels mounted horizontally between each driver, and additional panels in the bass cavity, each with holes of a specific size and number, different for each panel. Their function is to alter the mechanical impedance within the cabinet, so that only sounds within a certain frequency range can pass freely through the panel. In effect, the driver ‘sees’ a sealed box at mid range frequencies, a mechanically damped box at mid bass, and a reflex box at the lower bass. This gives many of the benefits of a sealed box, while allowing the bass extension and efficiency of a ported design.

Two ports vent from the bottom of the cabinet but are of different lengths, and there is also an internal port between two of the cavities in the bass section, responsible for the main tuning of both 165mm drivers to a very low 20Hz, while the asymmetric lengths of the two external ports affect the phase of the speaker system. The result is a bass output that is deeper, but also tighter and more tuneful, than is the norm for speakers of this size and, coupled with the other design features, leads to a high degree of phase coherence across the audio band.

Regarding the drivers themselves, these were chosen after extensive tests just listening to the raw output of the driver when fed a music signal directly. The bass/mid units are treated paper cones, but the cone profile has been carefully selected to control breakup modes by making the radiating area progressively smaller with increasing frequency. The crossover is a modified second-order for the bass/mid to treble and has been designed to ensure minimum phase distortion through the crossover region, while the sub bass unit is first order from a very low 80Hz roll off and it, again, is designed to minimize phase distortion. Only one component is in the crossover circuit between the amplifier and each of the three drive units, all of which are working in positive phase.

All in all, then, there is quite a lot of thought and sophisticated design under the hood of this superficially straightforward loudspeaker, and the results, er, speak for themselves. The phase-coherent approach, and the comparative lack of smearing of transients and bass, has created a loudspeaker with a highly natural sense of music‑making.

The review sample was supplied in a high gloss piano black finish, which looks sensational. The smaller speakers in the Russell K range can be a bit ‘Marmite’ in their looks, especially when fitted with the (optional) red front baffle, but there is no doubt in my mind that the Red 150, while pretty conventional in appearance, is both nicely proportioned and a bit of a looker; various wood finishes are also available. Size wise, the speakers fit nicely in my British Standard living room, taking up somewhat less space than the Focal 1028Bes they usurped and, thanks to their front-facing ports, happy to be positioned nearer to the wall than the Focals. 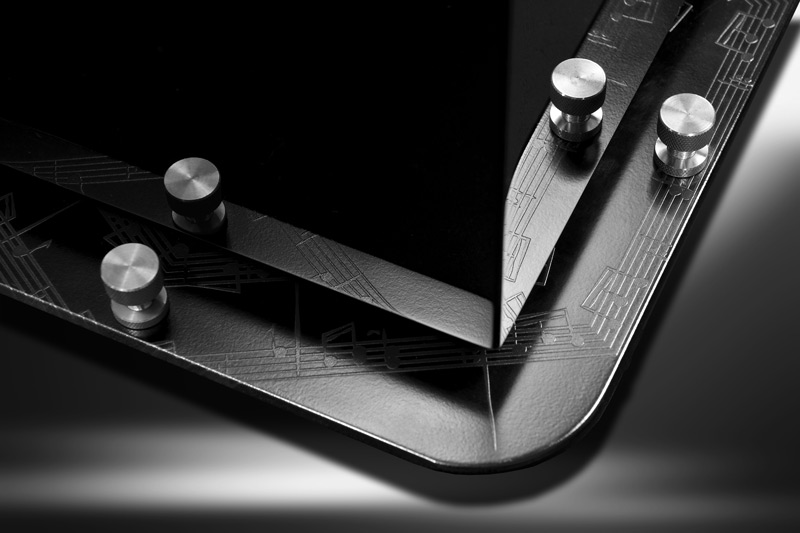 So to the sound, and I have news for anybody who has read so far and is now wondering whether these might turn out to be another brilliant but flawed loudspeaker, where the cabinet colorations are the price you pay for excellence in other areas. The news is that, no, while they are indeed brilliant, and while no speaker is going to be perfect (let alone a £4k one), cabinet coloration is not something to worry about.

The first thing that struck me on listening to the Red 150s, was how good the timing is, and how vividly they portray detail. Percussion is breathtaking: natural, fast, tactile, and rhythmic to a degree few peers can approach. The drum solo in Brubeck’s ‘Take Five’ [Time Out, Columbia], for example, shows clearly how Joe Morello works the melodic and thematic elements to the piece into his solo. Bass is similarly fast, agile, and tuneful, and not lacking in attack, Stanley Clarke fans, take note. Timing is one of those things which I rather suspect we audiophiles have learned to make allowances for over the years, certainly when you hear a component which times well, something inside immediately relaxes – it’s as though parts of your brain and body say “easy, guys, this is going to be OK”. Thus relaxed, one can get on with simply enjoying the music.

Detail retrieval can also be something of a double-edged sword: scads of detail can, if not properly resolved, simply obscure or confuse the music. On the other hand, detail, when properly placed and presented, can help make more sense of nuance and subtlety – we better understand the ‘how’ and the ‘why’ of the writing and the performing. So if, as here, you have a loudspeaker which can resolve the timing, and the detail, into a meaningful, coherent performance, you have the battle mostly won, assuming the upstream components can deliver, of course. I often pull out Graham Fitkin’s ‘Untitled II’ from Flak [self published] as its rhythmic complexities, and percussive piano playing have been the undoing of many a respectable system. The Red 150s not only separated the piece’s two pianos tonally and spatially, but led me to an appreciation of the two pianists’ phrasing which I’d not hitherto experienced. The pianos were also solid and appropriately massive, the bass being weighty but not heavy; nimble and responsive, with very little tendency to drag the proceedings down. This was married to a tonality which is clean and crisp, without becoming clangy in the upper registers.

Which brings me on to the lack of obvious coloration. Tonally, instruments sounded not only as they usually do, but also much as they do when heard live. The brass in the finale of the Saint-Saëns’ titanic ‘Organ’ Symphony [DG Galleria] was suitably strident without being shrill or forced, for example. Some speakers can make brass’ upper registers sound like they are being squeezed out after considerable effort, like (not particularly) musical toothpaste from the end of the tube. The Russell K’s made it clear that one should appreciate the effort of musicians; one should not have to sympathise.

Soprano sax, not a favourite instrument of mine, traded shrillness and aggression for ethereality, all the better to render the contrasts between the crispness of a marimba played with hard sticks, and the mellowness of soft hammers, set against the sax’ sometimes urgent, sometimes breathy plangency in ‘Frame’, another rhythmically complex piece by Graham Fitkin [Frame, self published].

So it’s pretty much ‘job done’ for the basics of scale, tonality, timing, and detail, albeit some due diligence in setup and placement reaps considerable rewards. When Russell brought the Red 150s round, we connected them up to my dCS Puccini and Albarry pre/power, using Audiomica’s Genimides and Europa speaker and interconnect cables, and spent a happy hour or so fiddling around with placement. A couple of centimetres one way or the other made all the difference to resolving the sense of stillness and contemplation in a Tord Gustavsen Trio track we used. Once we were happy, the benefits were obvious and the speakers began to disappear.

Vocals are highly natural, so that on Gretchen Peters’ ‘Idlewild’ from Hello Cruel World [Scarlet Letter Records/Proper Records] the Red 150s rendered the lyrics simply more meaningful and heartfelt, so that the song was just much more communicative and affecting. Something less obviously pulling at the heartstrings, perhaps, such as Blair Dunlop’s ‘Secret Theatre’ from Bright and Blossom [Rooksmere Records] was not only blessed with limpidly intelligible lyrics, but also its metre and rhythm worked better with the phrasing of the guitars.

Perhaps worryingly, I’ve struggled to identify a significant Achilles’ Heel in the Red 150s, my feeling being that timing and overall coherence, including phase coherence, is so fundamental to proceedings that any other flaws recede almost into irrelevance, especially when they are sufficiently well mannered as to not draw attention to themselves. It is not a particularly large loudspeaker, so while it worked very well with my Albarrys’ 110 Watts in my modest 12m2  living room, appreciably larger spaces might make more demands, albeit I think the Red 150s have ample capacity to raise their game. However, I listen loud (my wife thinks I’m deaf) so I’d not expect the Red 150s to struggle until asked to fill a considerably larger volume.

Dynamics are vivid; it’s that speed and responsiveness thing again. I’ve always found the playing on Roberto Fonseca’s album Yo [Jazz Village] a little difficult and somewhat overly aggressive at times, but now the opening track, ‘80’s’ was explosively energetic, exhilarating rather than battering the listener into some form of acceptance. The Red 150’s soft dome tweeter is rolled off an octave or so below my usual Focals’ Beryllium unit, but the Red 150s don’t lack for speed and attack. Indeed those characteristics define much of what is so great about them.

I found the performance in the bass to be particularly impressive. They can go surprisingly deep, but remain agile and tuneful. I put on ‘Sorceress’ from Return to Forever Returns [Eagle Records], partly to see what they made of its vivid bass and drums opening, and found myself mightily impressed by the way they delivered the sheer speed and impact of their attack, while simultaneously giving a clearer sense of the fundamental note itself. But also, and unexpectedly, I was struck by the fact that the Red 150’s showed the whole piece to be much funkier than I’d thought, with Chick Corea’s piano especially having much more subtlety and swing in a piece which I’d always thought rather closer to prog rock than jazz. Big bands are sheer bliss through the Red 150s, and I gorged myself on Abdullah Ibrahim’s Ekapa Lodumo [Enja Records], which swings with such ebullience it’s hard to sit still.

What is so great is the Red 150s ability to present the sense and finer points of a performance, whether through scale and dynamics or in subtle nuance, and to do so with simple girl and guitar, driving rock, and complex jazz, or large and small scale orchestral. The Ariel Ramirez Missa Criolla [Naxos] had spaciousness and image depth aplenty, but retained the sense of intimacy of its comparatively small ensemble, whereas the Saint Saëns concerto had been suitably huge. Big band jazz has swing, exuberance, and dynamics, with an uncanny ability to show how the parts fit together in the whole.

In truth, I don’t think it pays to deconstruct the performance to any real degree, it’s far better to appreciate it as a whole. The Red 150s have a rare ability to get the timing and other fundamentals right, perhaps more right than experience has led you to expect, which makes it so much easier to just get on with the business of enjoying music – a remarkable achievement at any price. When I think about other loudspeakers with a similar mix of virtues, I’m struggling to think of any at much less than twice the Red 150s price, which makes them truly extraordinary.