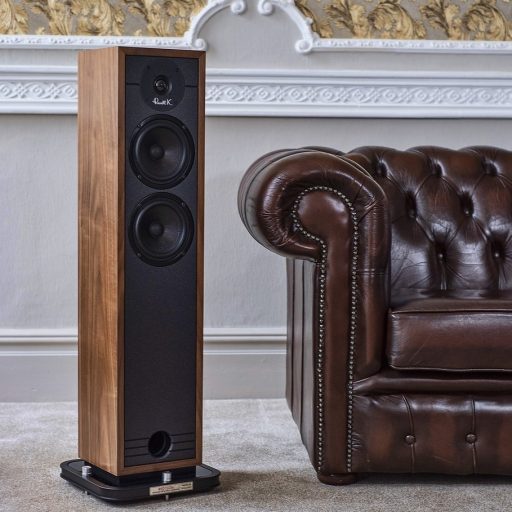 These loudspeakers got me doing something I sometimes forget to do. When I start with a new review product, I calibrate by listening to a handful of familiar tracks. But it’s very easy to focus just on those tracks and forget about the music on the rest of the album. On at least two occasions during the work-up for this review, I found myself listening to the entire CD, rather than just the track I’d put it on for. If you compare your loudspeakers on a cost-per-unit-volume basis, I may need to help you reassess, because the Russell K. RED 120 Se’s aren’t priced like your typical thirty-something litre offering; but that’s OK because they don’t perform like one,  either. These  loudspeakers have continually reminded me I have great music collection with some astonishing performances captured in it. Not every speaker that has graced these rooms has managed that.

There’s no shortage of well regarded, smallish floorstanding loudspeakers at comfortably under a metre tall and maybe 20cm wide. It’s a nice size for a
domestically acceptable product which promises decent all-round performance without dominating a modest sized living space, and I expect many are sold to their owners for exactly that reason. That probably explains why the majority are also keenly priced; £3,000 will buy you a very respectable, well-reviewed product from any one of a number of makers, and they’ll doubtless do a good job for a lot of people. So why might you, dear reader, be interested in a speaker of this size, that costs twice as much as those?

Let’s assume then that, like many people, this is a size of loudspeaker that ticks a lot of boxes for you. But you’ve been there, done that, and now require more. Moving on, you may have assumed, will require moving on to something bigger.

The Russell K. approach to loudspeaker design is a little different. And it’s why you might want to read on if you’ve got this far. Manufacturers can keep development costs down by keeping to familiar recipes; conversely, being a bit different can be costly. Neither the cabinets, nor the drivers, nor yet the crossovers here are what you would call entirely conventional, but this isn’t the sort of wilfully idiosyncratic design that screams ‘owned by a single bloke’ either.

The instruments remain distinct, separate and easier to discern
in the busiest, most complex, or most dynamic passages.

Russell K. cabinets are undamped. Tradition has it that you’ve got to damp your cabinets, or they’ll resonate and sing along. However, designer Russell Kauffman maintains that while damping may prevent cabinets from resonating along with the music, it also stores energy and releases it out of time, smearing transients and timing cues, and generally messing up the bass in particular. His solution is to manage the cabinet resonance by careful bracing and attention to detail on the internal structure of the loudspeaker, so that if the cabinets do join in, they do so manageably, notably in time with the music, and crucially, they stop when the signal stops.

It seems to work; music I’ve thought of as complex, or dense, has revealed itself more lucidly. Take ‘Fiesta’ on the Chick Corea and Gary Burton duets album The New Crystal Silence [Concord]: you hear more deeply into the tonal differences between piano and vibraphone, the instruments remain distinct, separate and easier to discern in the busiest, most complex, or most dynamic passages. The notes start and finish when they should, and you hear them all the better for it. Not only are these revealed as better, more interesting instruments, the musicians are clearly having a lot more fun.

Russell also uses these internal bracing shelves to manage the loading of the drivers, and air flow within the cabinet. The bracing subdivides the cabinet into zones for each driver, and is perforated by carefully sized and positioned apertures that act to impede air flow beyond a given frequency. Each driver sits within its own division of the cabinet and, thanks to the way the bracing acts as a form of acoustic impedance, the bass cabinet can behave more like a sealed box; midrange energy stays mostly in the region of the midrange driver and only the lower frequencies use the whole of the larger chamber. The bass reflex system uses an internal port to tune the output, this vents into a small cavity which effectively contains any port resonances within the box, and thence it exits to the room by a small, forward-facing port. The port system has been tuned to a positively subterranean 21Hz, and because little to no midrange energy finds its way into the chamber vented by the port, there’s no appreciable chuffing, or other ‘noises off’ to distract the listener.

Compared to the regular RED 120, the Se edition comes with upgraded tweeters and reworked crossovers. The tweeter used in the RED 120 is a 25mm soft dome with a ferrite magnet system and a copper clad aluminium voice coil with a copper Faraday ring; a second magnet, and a metal face plate feature in the Se version. The lower frequencies are dealt with by two 5” bass units with impregnated paper cones of curved, optimised acoustic profile. The motor uses a high-power ferrite magnet, a 25mm voice coil over an aluminium former, and a Faraday ring. The paired bass drivers are connected in a two-and-ahalf-way configuration, the upper driver handling bass and midrange, while the lower one handles only lower bass with a crossover which starts to roll off above 80Hz.

Russell chooses his drivers by auditioning them ‘raw’. No enclosure, no baffle, no crossover, no test tones, just a driver connected to an amplifier via its leadout wires. Doing this highlights how many decent quality drivers, even from respected brands, exhibit audible compression and distortion. By contrast, the drivers Russell chooses for his own loudspeakers are cleaner and more dynamic, and the Se versions are audibly improved over the stock design.

This process allows some scope for originality on the crossovers. A modified 12 dB per octave slope rolls off both tweeter and bass/mid, with only one coil in the bass path, and one capacitor in the treble signal path. Tweeter attenuation is via a Zobel network with deliberately misaligned component values as opposed to the conventional L-pad resistor set up. This avoids having resistors in the signal path, and the component values have been adjusted by ear, using speech and music. The -Se variant crosses over at a relatively low 1800Hz (the RED 120 crosses over at 2200Hz) because this is a better match with the upgraded tweeter, and there’s an additional small capacitor in parallel which gives the crossover a faster rise time. Low bass uses an enclosed field iron core inductor for improved power handling and low energy leakage. This Se variant has a second, similar inductor in the return path, effectively creating a balanced circuit. This is said to improve bass tunefulness.

It would be fair to say that the RED 120Se loudspeakers concede a little to the larger RED 150 in terms of scale and weight. I used the RED 150s very happily in my room for a few years and the ‘120s are a smaller box with smaller drivers, after all. But it’s very quickly clear that the (£700 more expensive) RED 120Se is the better loudspeaker. The difference is most noticeable on large-scale orchestral music, which trade a little of the sheer size for a lot of the >>

It’s very quickly clear that the Red 120Se is the better loudspeker.
The difference is most noticeable on large-scale orchestral music. 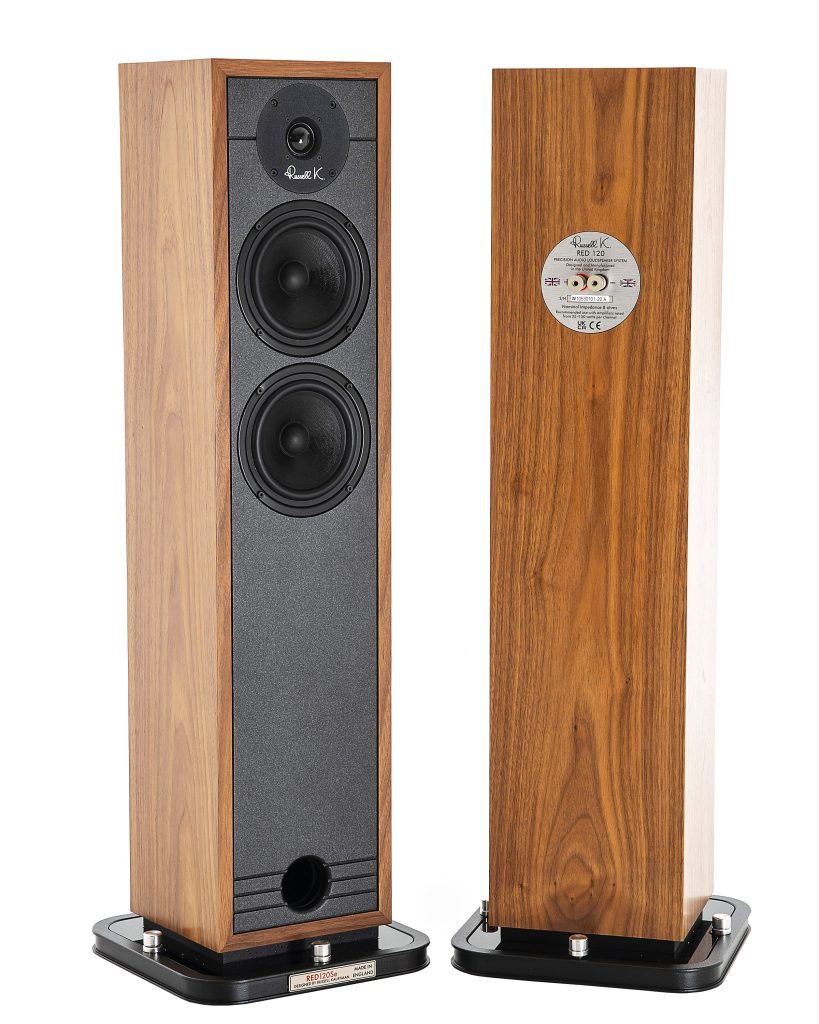 >> purpose and musicianship. Arvo Pärt, Symphony No. 4 [ECM], the second movement features some deep, dark notes from strings and bass drum, and while there’s no great shortage of impact here, what really impresses are the instrumental textures, the contrast between xylophone and strings, or violin/violas and cello/bass. The RED 120Ses show you how the composer creates and maintains tension and the way the conductor achieves that through the performance; other speakers which go deeper have been known to gloss over this sort of thing, concentrating instead on giving you an impressive hit of bass, somewhat divorced from its musical context. Freddy Kempf, Prokofiev, Piano Concerto No. 2 [BIS, SACD] shows not only his exemplary articulation and tone, but also real insight into the interpretation through his phrasing.

The RED 120Ses exert very good control of the different musical forces. The music remains lucid even in the busiest, most energetic passages, in a way reminiscent of a live, unamplified performance. When called upon they will play very loud indeed without losing their composure, but they don’t do this by being buttoned-up; the music remains expressive and eloquent, the excellent sense of spatial detail intact, so the way the different orchestral forces have been set to work with each other, or with a soloist, is easily and clearly perceived. Maybe there’s something to this notion of choosing the cleanest, most uncoloured drivers from the outset.

One takeaway here is that bass, scale and depth are all very well, but not sufficient in themselves. And perhaps more than that, what’s really important is a sense of proportion. Take ‘Log’, a piece for six pianos by Graham Fitkin [Decca]. Now six pianos in an average domestic listening room are about as appropriate as a symphony orchestra and chorus, so there needs to be some accommodation here. Me? I’ll happily trade some size and heft for an image that maintains the proportions. I want to appreciate the relative masses, sizes and power of the component elements, so I can hear deep into the performance. The RED 120Ses help me follow an individual pianist’s contribution, appreciate the timbral differences, the contributions of acoustic and electric instruments, sense the way the centre of mass of the music shifts around in the soundscape as individual pianos take their lead. I am won over by the performance, not run over by shock and awe.

So, talking about overwhelming performances, Hugh Masekela, ‘Stimela’ from Hope [Analogue Productions, SACD] has colours and textures often only hinted at. Masekela’s vocal verges on uncanny, the voice and percussion working so tightly together for emphasis, and the evocative timbres of sax and trumpet just take this, already compelling, track to another level of immersiveness.
It’s such a warhorse – I defy anybody to go to a hi-fi show and not hear it at least once – it’s quite easy to become inured to the power of its message through over familiarity.
The RED 120Se’s made it fresh again.

They are also very good at telling you what’s going on in the rest of your system. Change what the CD player sits on and you hear the effect. Change what the speakers rest on, and you hear that too. Most of this review was conducted with the spikes resting on AcouPlex discs, which brought out the subtleties of phrasing in ways that made regular metal spike cups, or coins, or floor protectors sound unconvincing and uncommunicative. A little attention to placement, support and isolation will pay dividends here. So many audio touchpoints and benchmarks are hit with precision by the RED 120Se: I have talked quite a lot about timbre and colour; we also have articulation, pitch and tunefulness – Renaud Garcia-Fons’ bass is an exemplar: tight, tuneful and full of texture on ‘Berimbass’ from Arcoluz [Enja], so those claims as to improvements to the bass via the crossover tweaks ring true. And perhaps implicit in the speakers’ ability to hear deep into the mix, is a facility with imaging – Patricia Barber’s quartet on Café Blue [Premonition Records, SACD] has real presence and form; and last, but arguably most important of all, we have timing – the quartet is absolutely ‘on it’ with an almost telepathic cohesiveness. These modestly-sized speakers have redefined what I expect from this size of cabinet, and driver complement. That £6,000 asking price doesn’t feel like a stretch at all.