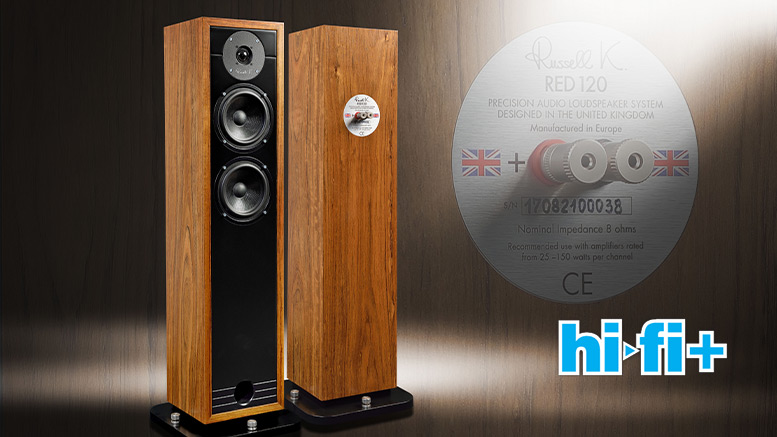 Russell Kauffman has been in this industry for as long as I can remember; he has worked for Bowers & Wilkins, Morel, and was a regular on Paul Messenger’s legendary blind listening tests in the 1990s. But his role has generally been in sales and marketing, so it was with some surprise that I discovered the Russell K brand back in 2014. It seems that while in those meetings with engineers Russell was quietly absorbing a lot of what it takes to build a loudspeaker. He mentions Epos founder Robin Marshall as one person who liked to talk tech, and that must have been a good set of conversations because the reviews that have greeted Russell K’s Red series of loudspeakers have been enthusiastic all round. I have to admit I was intrigued; what did these fairly diminutive and apparently undamped speakers do that made them so popular?

The Red 120 is the latest member of a small range that includes two stand-mounts, the Red 50 with a 130mm mid/bass driver, and Red 100 with a 165mm driver. There are as many floorstanders that look like the stand-mounts, but with an extra main driver and a bigger box. The Red 120 is the smaller of the two and combines a 25mm soft-dome tweeter with 130mm cones in a two-and-a-half-way configuration, meaning that the top cone does bass and midrange while the bottom one covers only the lower octaves, like many others.

The main difference lies inside the cabinet where there is no damping, something that would usually result in a very lively and coloured sounding loudspeaker, and not the sort of thing to garner a lot of praise. But instead of damping, Russell uses shelf braces with holes in below each of the drivers. Each shelf has a different number of holes that have been determined by extensive acoustic tuning. The idea is to trap the midrange within a small section of the cabinet – to provide a damping brake around 100Hz – then allow the whole system to relax for the lower bass. There is a vertical tube going through a solid brace just above the visible port, but it does not bend round to the outlet, instead venting in to small internal space. It’s a unique arrangement to my knowledge and must be key to the vitality that this small speaker can find in a recording.

The drivers don’t look particularly special, but they were literally hand selected; that is, when Russell was trying different models he held each in his hand to see how well it performed in open space. It’s an unconventional approach, but he thinks that if a driver works well under such challenging conditions then it should be pretty good in a cabinet. Lots of thought and research has gone into the crossover as well; this uses a modified Zobel network to attenuate the tweeter instead of the conventional L-Pad arrangement, leaving only a single capacitor in the signal path to the tweeter. The mid/bass driver has a custom made enclosed field ferrite core inductor chosen for its very low DC resistance which Russell credits for giving this speaker its impressive speed; it also has “almost no stray field” so is unlikely to affect other components on the board. The bass driver has the same inductor with an iron core chosen for its sound quality.

The cabinet is externally quite small in section; it’s marginally wider than it is deep but neither dimension breaks eight inches. Overall this is a 15 litre box with a single pair of cable terminals high up on the back. This means that cables hang down the back, which isn’t so appealing, but does keep internal cabling short. The plinth extends the footprint and has fixings for long stainless steel spikes in an unconventional diamond arrangement; the threaded inserts are on all four sides of the plinth which was chosen to ease set up. The fact that the spikes are easy to adjust from the top is also a boon in this respect.

Russell has a usefully methodical approach to speaker set up. He first establishes distance to the wall using a suitably tuneful and bass-strong piece of music then listens to imaging to find the best distance apart, starting with the speakers two thirds of the distance from you the listener and then moving them inwards in small increments to give the most open sound. Finally he recommends a small five degree toe-in. This last is an indication of sorts that the treble and mid are slightly more forward in balance than many loudspeakers. It is always necessary to tweak toe-in to balance a speaker but rarely does a manufacturer commit to such a precise and small angle.

The first thing that strikes you once the above has been done is how the bass is so deep and yet so taut. This I suspect is the key to the Red 120’s incredibly immediate and engaging sound; it makes the bass on so many other speakers seem sluggish. It is also extremely revealing across the band, with an uncanny degree of articulation offered to all the instruments and voices in a mix. There is a slight emphasis on cymbals and the hi-hat stuck out on a couple of tracks, but such factors seem irrelevant when you become immersed in the solidity of the imaging and the vitality of the music. If you like to enjoy the energy and excitement of music there aren’t many alternatives that do this so well, and in many ways communicating this quality is what allows you to suspend disbelief.

The speed of response is particularly strong; double bass seems to benefit from this particularly well and ‘Pitter Patter’ from Rymden[Bugge Wesseltoft etc, Jazzland] makes this abundantly clear. Dan Berglund’s double bass playing is always good but here things got a whole lot more inspiring especially on those occasions when the piano and drums took a back seat behind a solo.

The size of the speaker limits it slightly in the dynamics department, but not as much as you might expect. It can’t quite deliver the full majesty of Beethoven’s 5th, but gets close enough and does so without giving any sense that there’s a port in the cabinet. Front firing ports have to be very well sorted to achieve this, but Russell K has clearly done his homework; the bottom end extends remarkably well and always remains in time. This much is equally clear with vinyl where the degree of separation between layers in a mix is remarkable. Even the ostensibly three piece ZZ Top adds extra channels of guitar in the studio and these speakers have no difficulty opening each one up and letting you know what’s going on. The tone of the two leads at the end of ‘I’m Bad I’m Nationwide’ [Deguello, Warner Bros] is clearly different, the Red 120s making it clear that the left hand one leads in the righteously smokin’ department. Steely Dan’s ‘Show Biz Kids’ [Countdown to Ecstasy, ABC] sounds a bit plummy afterwards but you can’t help but be drawn into the way that the backing vocals, rhythm section, and two leads – guitar and voice – lock in together so well yet the nuances of each can be appreciated. This track proved almost mesmerising thanks to its remarkable syncopation and the genius of the composition. Any sense of forwardness disappears with this source and suggests that the brightness encountered earlier was coming from the digital source and/or its connecting cable.

This is an unusually revealing loudspeaker that more than makes up for its diminutive stature with the sheer level of detail that it can extract from the signal. It’s clearly a slave to whatever comes down the cable and manages to expose an awful lot of musical detail in a fabulously coherent manner. ‘Coherent’ is the key word; the Russell K Red 120 may not produce the biggest image in the world or have the most muscular dynamics but it can deliver the music precisely and effortlessly in time. There is no sense of time smear and in this respect it deserves to be ranked alongside the best that Rega, Neat, and a few others have done. The Red 120 doesn’t look like great value when compared with the other floorstander I reviewed this month (Audiovector QR5) but looks can be very deceptive. Musical enjoyment is not a visual thing it’s a sonic trick that only really works when the timing is spot on. And with the Red 120 that is always the case.