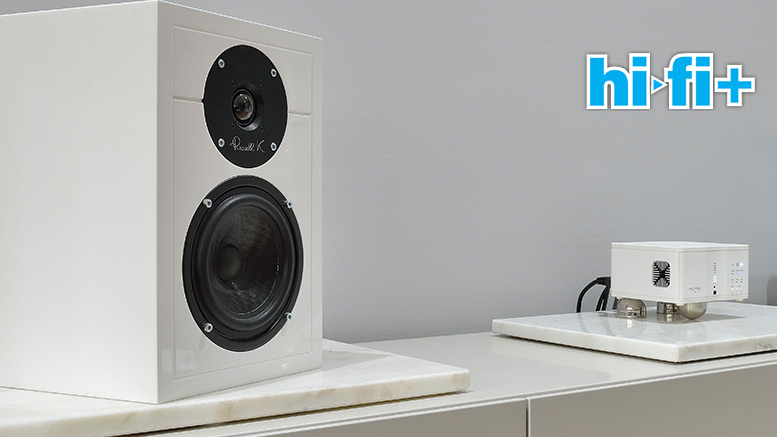 Someone must have been telling lies about Russell K. Or so I thought when I picked up some of the more swivel-eyed comments about the Red 50 from some of its dealers and owners. Having reviewed the Red 100 (an excellent standmount in its own right), there were more than a few febrile comments expressed to me about the smaller Red 50 being the real hot button product. So, I got a pair, and either I’ve joined the swivel-eyed set, or they are right. I think they are right!

Of course, those components are high quality ones. Russell K uses a similar 25mm soft dome tweeter (with a single magnet in place of the double magnet in the Red 100) and a 130mm version of the 165mm doped paper mid-bass driver as found in the bigger design, but the cabinet is not so chambered as the Red 100 ( just the one shelf above the bass driver ). The Red 50’s smaller cabinet is rear ported, but the cabinet volume means the loudspeaker delivers less low frequency energy, hence the mild bass augmentation.

How the Red 50 came about is interesting, in and of itself. Russell K’s loudspeakers are designed in the UK and built in Poland. The Polish loudspeaker engineers tasked with building these bigger standmounts turned out to be quite hardcore audio enthusiasts, firmly in the Flat Earth school. “You need to design a modern Linn Kan!” said the product manager. Every single time designer Russell Kauffman got in touch with the factory. Eventually, Russell caved, and this formed the initial development project that led to the Red 50. 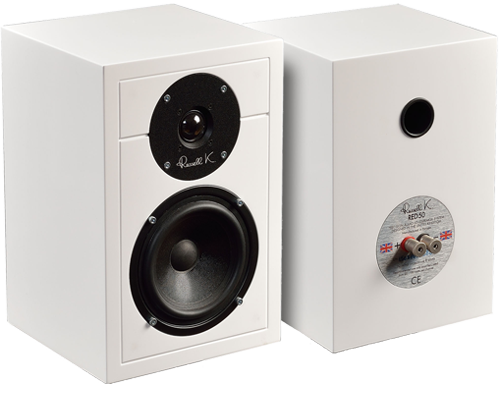 Russell K (the man, and ultimately the brand) was not entirely comfortable with the concept of reintroducing the boundary loudspeaker. This isn’t a particularly refined way to get good bass, so the compromise was moving a loudspeaker less than a metre from the rear wall, and giving the loudspeaker a mild bass boost in the upper bass.

A lot of the rest of the loudspeaker design is pulled from the Red 100; same drivers, same absence of internal damping, same specially made enclosed field ferrite core inductors, even the same PCB for the crossover, although the Red 50’s crossover is even simpler than its bigger brother, with two less components per side. It still retains the 12dB/octave slope, too. The cabinet has a smaller volume, of course, but principally the concept works by not buying in extra components for a new loudspeaker when you already have components for the existing loudspeaker ready to roll.

If anything, this smaller cabinet somehow makes Red 50 loudspeaker even less ‘fussy’ than the Red 100, which was in itself not an amp fussy design. Sensitivity is a slightly lower 85dB, but the benign eight ohm load and complete absence of any nasty phase angles in that impedance plot means you could use the Red 50 with almost anything. I used it with a Roksan Caspian M2 integrated amp, and the Tsakiridis Aeolos Super Plus reviewed in this issue, and was perfectly happy with the sound from both. And as long as you remember to pull the loudspeakers out about half a metre or so from the back wall, and bear in mind these are not loudspeakers designed to fill a barn of a room, they are easy to install, too.

Toe‑in is relatively mild and the speakers aren’t fussy about positioning, so that the only thing that needs a bit of consideration is the choice of stand. Russell K makes a stand with a heavy base and light wooden uprights, and this is ideal, as would Something Solid XF stands or, if you can find a pair on eBay, Linn Kan II stands. Light and rigid is the way to go.

If the design brief was to make a pair of Kans for the 21st Century, Russell K has both failed and succeeded, and that’s what makes the Red 50 so damn good. The ‘fail’ part is they don’t have the Kan’s ‘unique’ frequency response (with peaks you could ski down). The ‘succeeded’ part is they still manage to retain the Kan’s endless, effortless fun factor. Not in a ‘boom-tizz’ way, but simply in a way that makes you reconnect with your music. Some loudspeaker systems seem to think music is something to be endured in the pursuit of stark, drab fidelity, but not the Red 50.

Where the Red 50 works – and works so well – is it has that Kan-like engagement with the music. The one-word review is ‘believable’ sound. Listening is not a passive activity here; it’s for orgies or total abstinence. The first track I put on was ‘Because He Was A Bonny Lad’ by The Unthanks [Here’s The Tender Coming, Rough Trade], and about a minute into the track, I kind of wanted to move to Northumbria and learn the bagpipes. Vocals project into the room well and with great articulation, but these sterile terms don’t express what the Red 50 does so well here. Yes, it’s about the voices, but it’s about the kind of emotional impact you get from the music, too. And that’s something that the Red 50 is so great at resolving.

The slight and deliberate warming around 80Hz works surprisingly well, too. It’s not so overpowering as to make everything sound ‘great’ at first and ‘grating’ soon after, but it is recognition that a small cabinet in a small room needs some extra help along the way. In fact, the bass is relatively deep for a small box (don’t expect much below 50Hz, though) and rolls off gently, but that little augment makes the bass seem more powerful and – paradoxically – more accurate than truly ‘accurate’. This should come as no surprise – the LS3/5a sounds more like a piano than a piano! The boost is ‘most’ noticeable on string quartets, in the interplay between viola and cello. As this doesn’t have a counterpart in rock and jazz, most won’t hear it. That being said, Domingo’s tenor in singing the romanza ‘Una Furtive Lagrima’ from Donizetti’s L’elisir d’amore [Opern Gala, DG] sounds truly captivating and extremely dynamic through these loudspeakers, so the Red 50 is not one of those ‘made for rock’ speaker designs. Put simply, this is a loudspeaker that you enjoy listening to.

The Red 50’s limitations are more stated aims of the design than shortcomings proper. It’s a loudspeaker designed to make a big, fun sound from a small speaker in a small room. Break those design criteria and it shows. If you want ELAC-like lean, clean, and fast sound, buy an ELAC. If you want LS3/5a-like fidelity, then buy a pair of LS3/5a. If you expect gut-churning bass, or you have a room you could tango in and never touch the sides, buy a bigger loudspeaker. There will be a contingent of listeners who will protest that any loudspeaker tuned to deliver a bit of a lift in the upper bass cannot be considered ‘high fidelity’ because ‘high fidelity’ in such a rigid definition means ‘flat frequency response’. I’d suggest they shut up and listen, but this is the same contingent completely unable to do either. The rest of us will be happy listening to a lot of music on loudspeakers like the Red 50.

The ‘discs strewn around the floor’ cliché is kind of irrelevant now (because so much music is stored or streamed) and the idea of spending hour upon hour listening to music enrapt is fairly hard to reconcile with our time-poor modern lives. So a good loudspeaker needs to be quickly captivating, capable of drawing you in whether you have the time to play one track or a whole back catalogue. And that’s what the Red 50 does so well. It puts a very big smile on your face when you get those rare moments where you can listen to music. And that means you find time for more music.

Reviews build an elaborate vocabulary, which is in part useful for padding out the pages. We write of soundstaging, inky-black inter-transient silences, micro-dynamic shading, and lots of other terms that attempt to create a linguistic interpretation of sound. This can be useful, but can also get in the way when something is just ‘right’. And I think, for many people, the Russell K Red 50 is just ‘right’. It’s enjoyable, musically insightful, easy to partner, and easy to love. Very highly recommended.