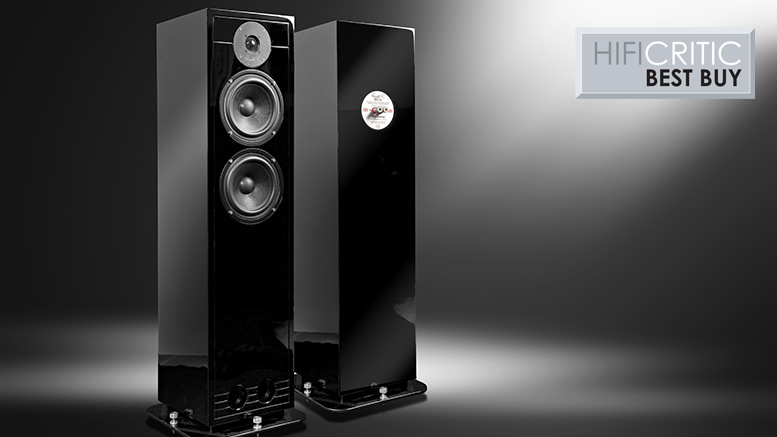 British designer Russell Kauffman’s Russell K Red 50 and Red 100 speakers have already been favourably reviewed in HIFICRITIC by the editor, but because RK was a long term member of his listening panels, the possibility of favouritism could not be discounted. We therefore asked Kevin Fiske to try the (currently) largest model produced under the Russell K brand, the £4,000 floor standing Red 150.

Kauffman’s designs embody some unrepentantly singular thinking that swim against the tide. For example, he favours undamped and relatively thinwalled cabinets while much of the industry is going in the opposite direction. Kauffman asserts that the damping and inert construction of most designs doesn’t magic away the energy radiated from the rear of the drivers; it merely causes it to dissipate more slowly, which in itself imposes a characteristic ‘saton’ (some might say unnatural) voicing. In contrast, well-designed thin-walled speakers with a lack of damping release the rear-radiated energy much faster, and thereby sound dynamically truer to life.

Note the use of the words ‘well-designed.’ Kauffman is not advocating a resonant free-for all. Rather, he is encouraging us to understand why so many modern speakers sound the way they do, and to ask ourselves whether we find their sound convincingly natural or not. As listeners, our ability to make such subjective judgments will vary widely. Those who are regularly exposed to unamplified live acoustic music will probably rapidly ‘get’ the Red 150s. Those who don’t have such a frame of reference, and who live on a diet of electronically derived and highly processed recorded material might not appreciate them as much. I wouldn’t label them a Marmite speaker — they do electronic music equally well — but truly to appreciate the Red 150s listeners will need the self confidence to believe their own ears, and to ignore what they are told to think by many vendors.

The Red 150s stand a metre high on their spikes, and look narrower than their 240mm width, thanks to glossy black front baffles being framed by whatever choice of veneer the cabinets are finished in. Sensitivity is specified at an average 87dB, with a nominal 8ohms load that dips to just above 4ohms. They use the same 25mm soft dome tweeter and 165mm doped paper cone bass/mid driver as the stand-mount Red 100s, but add a second identical 165mm driver to extend the bass reach and power. This, alongside the 35litre volume of the 1m tall cabinet (roughly twice the Red 100’s 18 litres), plus four internal bracing baffles (three of them perforated) and three tuned ports, enable the Red 150 to reach into the lowest octaves.

The bracing perforations put a brake on air movement at around 100Hz, so bass seems almost as controlled as an infinite baffle cabinet. Below 100Hz  the Red 150s combine the tightness and control of a sealed box with the extension and sensitivity of a ported enclosure: an internal port fires downwards into a smaller chamber; from there two further ports of different lengths exit side-by-side at the front of the cabinet.

Kauffman specifies his own drivers, making the initial evaluation of prototypes by holding them in his hand and connecting them to a music signal. He says this reveals a lot about the potential of each design: “If a driver makes recognisable music in your hand you can be pretty sure it will enable you to develop a musical speaker.” He’s no fan of the highly interventionist crossovers that are sometimes used to tame poor driver performance. Here each Red 150 driver has just one component in the signal path.

The tweeter is attenuated by an intentionally misaligned Zobel network (rather than L-pad resistors), providing attenuation without affecting phase or damping. The bass/mid and subwoofer drivers are powered via enclosed field core inductors. The bass-only unit starts to roll off above 80Hz at 6dB/octave while the mid crosses over at 2.2kHz at a modified 12dB/octve. All three drivers are fitted directly to the cabinets to avoid the effect of gasket material compressing over time.

Kauffman’s deliberately light touch with the crossovers is complemented by the positioning of the internal baffles, and the number and size of the perforations in each of them. “I’d say 90% of what we hear in the Red 150s is down to this tuning, not to the crossover,” he says. “There is no real conflict between measurements and the listening room. The challenge is to make the measurements correlate with what we hear. We start listening to a new speaker in mono, set up so that we can measure, listen, make changes and do it over again. We use a lot of recorded speech because it is so revealing of the phase anomalies and colorations that get in the way of good music reproduction.”

I connected the review pair to my Pass Labs XA30.8 Class A power amplifier using Sogon speaker cable [on loan from Audio Note (UK)]. A Pass Labs XP-30 pre-amp was fed from a Rega RP10 turntable and an Audio Note CD drive and DAC. After listening for a short while, I moved them about six inches nearer the wall for a slightly fuller bass, and that’s how they remained for the two weeks I spent listening to them.

The Red 150s proved very forgiving of room position, and it took just 60 seconds to set up on their spikes. Take a look at the picture accompanying this review and see if you can spot why this is so; then ask yourself (like I did) why all speakers are not spiked this way.

I use the word ‘natural’ a lot in my reviews because it is the quality I listen for above all others. Natural happens when audio’s holy trinity of dynamics, tonality and timing are all underpinned by appropriate room drive. Natural is what we hear and react to at a live acoustic music event, so ‘natural’ is what I want my audio system to deliver.

Proof that Kauffman is of a similar mind can be heard in the tonal balance of the Red 150s. Apart from the fine integration between the drivers, an equally striking result of his painstaking voicing is that (incontrast to many contemporary speakers that I have heard over the last decade or so), the Red 150’s top end doesn’t try to strip the enamel from my teeth, or its bass flap my trousers with exaggeration. They are ear balm for those of us who dread the sonic hell of ‘boom’n’tizz’ that we often hear at audio shows. When PM evaluated the Red 100s, he felt that they could do with a little more bass weight. The Red 150s respond to that request with a nicely weighted sub-30Hz in-room performance that treads a clever line between the tautness of infinite baffle bass and the efficiency and room drive of ported designs. Paired with the Pass Labs amplifier combination (which I rate very highly for its micro-dynamic abilities), the Red 150s sound fast, controlled and natural, giving a generous helping of bottom-end tonal exposition that few speakers of my acquaintance are able to match — and certainly none at a retail price of circa £4,000.

The results of the efforts to which Kauffman has gone to preserve phase angle during development, and his attention to detail in voicing, are also evident upon listening through the presence region, where material is up there with the best I have heard from such small drivers. While the Red 150s don’t quite match the virtual point source of my two-way Audio Note AN-Es, they nonetheless show exemplary coherence, especially for a three-driver design. They deliver more true-to-life dynamic nuance and detail than many, and do so without resorting to an unnaturally bright in-room performance. Because they deliver more micro-detail, we hear a truer transcription of the relationship between musical events and their time-base. Detail flows from good design, and true detail also contributes to good timing.

In my system and my room the Red 150s delivered a vivid and highly engaging rendition of well recorded material, sounding considerably more high-end than one might reasonably expect at their relatively modest price. They are better integrated than some more costly alternatives I can think of, deliver the audio holy trinity in good measure, and create a good helping of air movement or pressurisation that further aids the ‘you are there’ illusion. Some will ‘get’ Russell Kauffman’s drive for natural dynamics and tonal balance. Those that do will reap considerable joy from their outlay of £4,000. Those that don’t…well, I think that’s their  loss. Despite its highish price, the Red 150 definitely deserves a HIFICRITIC Best Buy rating.