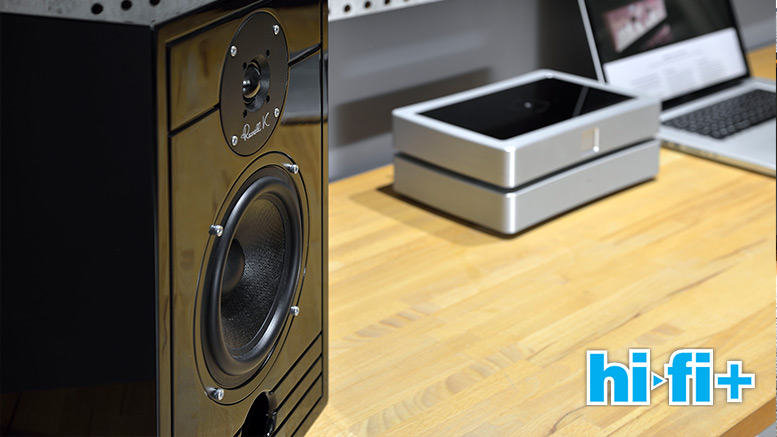 Russell K loudspeakers is the brainchild of Russell Kauffman, a man well known in the UK audio world. Russell has been involved in many of the country’s best-known loudspeaker brands in one capacity or another for more years than any of us would care to remember, although his most recent client was working as the designer for Morel loudspeakers. Perhaps his best-known design there is the Fat Lady design, an intriguing three-way, four-driver flagship tower speaker that looks a little like a, erm, fleshy female.

However, the course of the international design does not run smooth, and with Morel based in Israel and Kauffman based in the Home Counties of England, the relationship gradually came to an end. It was time for Kauffman to carve his own niche, creating a line of loudspeakers that bear (most of) his name. The Red 100 Precision Audio Loudspeaker was the first product from the brand, although a smaller Red 50 bookshelf quickly followed, and yet more models are in development. The design stays in the UK, although manufacture moves to Poland, where quality speaker builders still exist in good number. 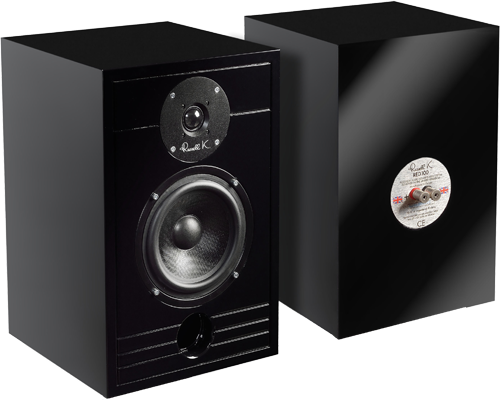 This preamble would be unimportant were the Red 100 just another two-way, front ported standmount. Looks can be deceptive however, and the loudspeaker has a lot going on under the skin. Russell Kauffman’s design draws on some elements of the classic BBC research and development that gave us loudspeakers like the LS3/5a. In particular, he agrees with the concept that a thick-walled loudspeaker cabinet adds coloration that can be heard in a thickening of vocals. By using 16mm MDF, except for the 19mm thick front baffle, the Red 100 manages to retain a lot of the benefits of a thin-walled cabinet. However, instead of using bitumen pads for damping, Russell Kauffman just goes for low cabinet flexing, thanks to two braces above and below the woofer. These feature a number of apertures that act as tuned acoustic loading. This makes for an energetic cabinet when music is playing, but one that dissipates energy quickly when it isn’t.

The cabinet is totally undamped, without even a glimpse of BAF wadding, foam, or bitumen-lined walls. If you unscrew the bass driver, you are met with bare MDF walls. The reason for the absence of damping in the Red 100 is that Kauffman suggests its action is never even across the full frequency response and acts to slow down the speed of sound travelling within the cabinet. However, he’s also quick to point out that this doesn’t mean those with damped cabinets (which is probably about 90% or more of loudspeaker users) should experiment with removing that damping; a designer engineers a cabinet anticipating the acoustic load that comes with the damping used, and changing that damping messes up those loading calculations, and messes up the sound of the loudspeaker in the process.

The drive units are a well-made 165mm doped paper cone mid-woofer and a 25mm soft dome tweeter, both using high quality ferrite magnets (rather than rare-earth materials) and Faraday-distortion cancelling copper rings. Kauffman eschews the current trend for metal, plastic, or diamond cone and dome materials, for a more tried and trusted approach, because they both measure well and sound good. The crossover, however, is a little less conventional. It’s a 12dB per octave slope, crossing over at 2.2kHz. The norm here is to go for reverse phase at the crossover point, but by deliberately shifting the textbook crossover values, the Red 100 retains crossover phase integrity, all the while keeping the drivers connected in positive phase.

The component count in the signal path is very low in this crossover; just one component per drive unit. However, the tweeter is attenuated by a deliberately misaligned Zobel network (instead of the conventional L-Pad), while the low frequency inductor isn’t the normal air-cored type, but instead an enclosed field ferrite core. Theoretically, this is an odd choice over the air-cored inductor, because this type of coil is very frequency dependent and has to be matched to the pass band of the crossover design. However, Kauffman has custom a UK supplier build to his precise specification. The ‘enclosed field’ part also stops a ferrite core from acting like a tiny performance-destroying radio transmitter.

This crossover network has an added bonus to the Red 100. Although it has a relatively low sensitivity rating of 86dB, the design of the crossover is such that it makes the loudspeaker an extremely benign load. Although it might not raise the roof in doing so, it’s the kind of loudspeaker that can work with low-output single-ended triode designs.

Although the Red 100 is front ported, the reflex port itself is tuned down to 35Hz, so instances of the port making that ‘chuff-chuff’ sound along with bass notes are functionally eliminated. Russell K wanted his speaker to behave almost like a sealed box in terms of bass precision and a reflex design in terms of bass depth. Of course, everyone would like this, but the Red 100 gets closer than many. That front port also means the Red 100 is relatively flexible as to placement. It needs about 30cm from the rear wall and a slight toe-in, but the loudspeaker really isn’t fussy. In terms of stands, it works best with very rigid, middling-mass designs (the company has a prototype in the works), and it is extremely flexible in terms of amplifier compatibility.

What the Red 100 does is expose the music without necessarily exposing the dark side or music replay. Yes, if you have a very thin, very bright modern recording, it will play that accurately (otherwise it wouldn’t be a loudspeaker; it would be a filter), but it makes that music fun to listen to. All reviewers have their stock pieces of music (I often don’t mention these, but use them universally; if I listed them in every review, the magazine would read like a stuck record), and it’s a sure sign of something good going on if you end up not focusing on them as test tracks and listen to the music, and the tracks that follow. I found this on albums like Rare on Air Vol 1 [Mammoth], which I’ve been using for nigh on 17 years as a day-in, day-out test, and found myself going past my regular track four (‘My Drug Buddy’, by Evan Dando and Juliana Hatfield – which ages it) and getting as far as track 12 (‘The Captive Heart’, by Brendan Perry) before coming to my senses and reaching for the next test disc. Then I did it again, this time with Rutter: Requiem and Five Anthems [Reference Recordings]. I played the whole album that time. And again, each time my Moleskine remained entirely blank as I switched out of reviewer mode and into ‘I like this, what’s next?’ mode.

Finally digging deep to dredge up those critical faculties, I think the reason the Red 100 works so well is it combines the twin demands of timbre and tempo exquisitely. The loudspeaker has good soundstaging – as befits a small, but wide-baffled box – and it preserves that staging as you move around the room. It also has excellent detail; perhaps not the separation of a three-way, but deceptively deep, taut bass for a small box. And it’s both in the pocket and in the groove, when you play anything with a beat.

I keep coming back to a famous name in audio’s past with the Red 100, and I can’t quite work out why. That loudspeaker is the Epos ES14, and it is still considered in many quarters as the acme of loudspeaker design. The audio world is littered with people who for some reason sold their ES14s and almost immediately bitterly regretted the decision. While the original Epos designer Robin Marshall and Russell Kauffman are old friends, I think the reasons for the connection run deeper. It’s the bass. The ES14 had the simplest crossover possible, and the bass driver was run straight from the power amplifier. The Red 100 has just one component in the signal chain between amp and driver, and coupled with the lack of internal damping, it makes the Russell K loudspeaker as unconstrained as its spiritual forefather.

Most of all though, what is really likeable about the Russell K Red 100 is that it’s easy to like, and yes that sounds like circular logic. But here’s how it works; a lot of loudspeakers at this price are like the kind of people with which you might want to share a cerebral discussion about the early works of Sibelius. The Red 100 is that guy who’s so passionate about Sibelius, you catch his enthusiasm, and move to Finland. You know it’s going to be a good evening with the Red 100; there may be tears, some red wine will be spilled, and someone’s probably going to wake up dazed, confused, and pregnant. It’s a Byronic figure in a world of actuaries and accountants. OK, so not everyone’s going to like that. Some like their world grey and unassuming and bland. So be it.

We try to distance the designer from the product in 21st Century audio, because everything has gone a bit ‘corporate’. But in the Russell K, that’s impossible. You buy the Red 100 because you buy into Russell Kauffman’s ideas about the way a loudspeaker is supposed to sound. Although this is predicated on good engineering practice, he’s prepared to go off the map as and when the sound demands it. His take is one of science as empiricism and observation, rather than rigid adherence to the status quo, and the Red 100 loudspeakers sound all the better for that. The Red 100 is a good speaker, but more importantly it’s a good idea, and they are rare. Not an easy speaker to classify in audio terms, but highly recommended, and fabulous value to boot.